One of last year’s most interesting business books was Clay Shirky’s “Cognitive Surplus: Creativity and Generosity in a Connected Age”. The rise of the affluent society has left people with lots of time and talent to spare, Mr Shirky argues. For decades they squandered this cognitive surplus watching television. Today, thanks to the internet, they can also channel it into more productive pursuits.

For a surprising number of people these productive pursuits involve worrying about companies’ logos. Howard Schultz, the boss of Starbucks, recently announced that his company would mark its 40th anniversary this March by changing its logo a bit. The words “Starbucks” and “coffee” will disappear. And the mermaid, or siren, will be freed from her circle.

Starbucks wants to join the small club of companies that are so recognisable they can rely on nothing but a symbol: Nike and its swoosh; McDonald’s and its golden arches; Playboy and its bunny; Apple and its apple. The danger is that it will join the much larger class of companies that have tried to change their logos only to be forced to backtrack by an electronic lynch mob.

END_OF_DOCUMENT_TOKEN_TO_BE_REPLACED 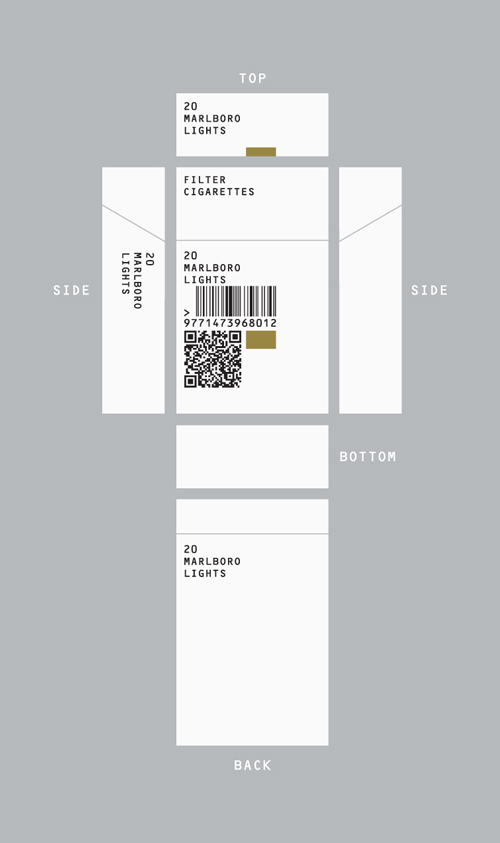 When we (Build) got the brief (from Icon Magazine) we already knew about the government’s proposal for unbranded or plain packaging. We chose to approach the design almost from a non-design perspective. Stripping out any superfluous design elements and taking it down to an ultra-“generic” feel was quite liberating.

A lesson in reductionism. OCR-B, a monospace typeface, was chosen for its clarity and genericism. The QR code [beneath the barcode] links to a government website on the effects of smoking and how to quit. We introduced a very small strip of colour to help indicate from a small distance the cigarettes’ brand. This is for two reasons: to aid people selling the cigarettes and to add a small level of anti-piracy measures (the colour would be foiled). I feel this is the most successful version of the three. 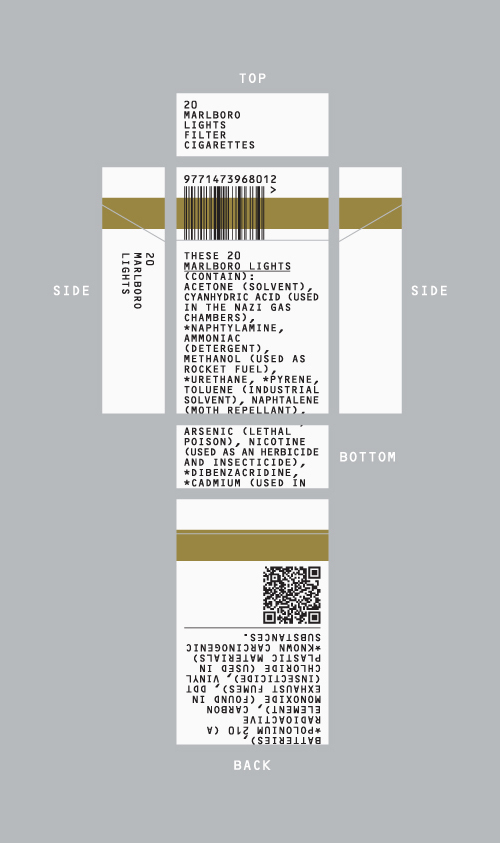 Information. What is actually in a cigarette? There is no hierarchy, with the brand taken down to the same level as the information. Food packaging now has to list its contents by law – why should cigarettes be any different? This is what is contained in the cigarettes you are about to smoke. This design brings that information to the foreground, and the branding takes a back seat. 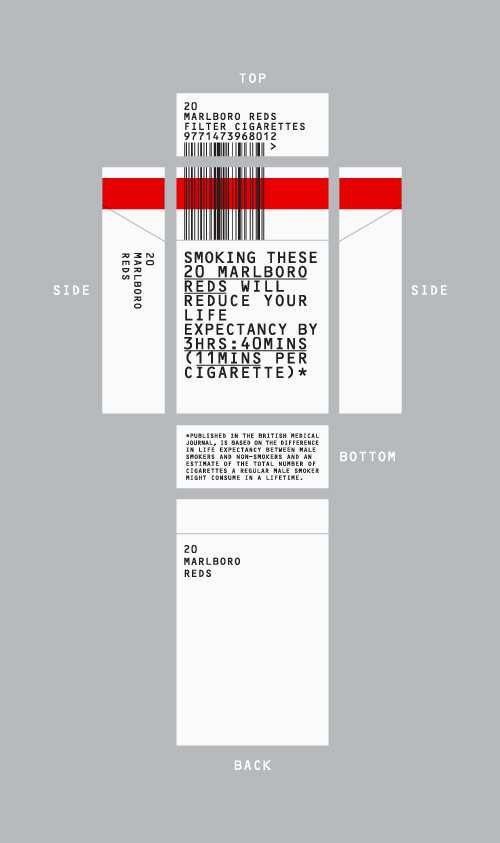 The warning message. What are the possible consequences of smoking this packet of cigarettes? Real-time messaging, real consequences. Branding is taken down to a strip of recognisable colour – brand allegiance reduced to a colour strip only. As a designer, this approach is really refreshing: no gloss, just information. 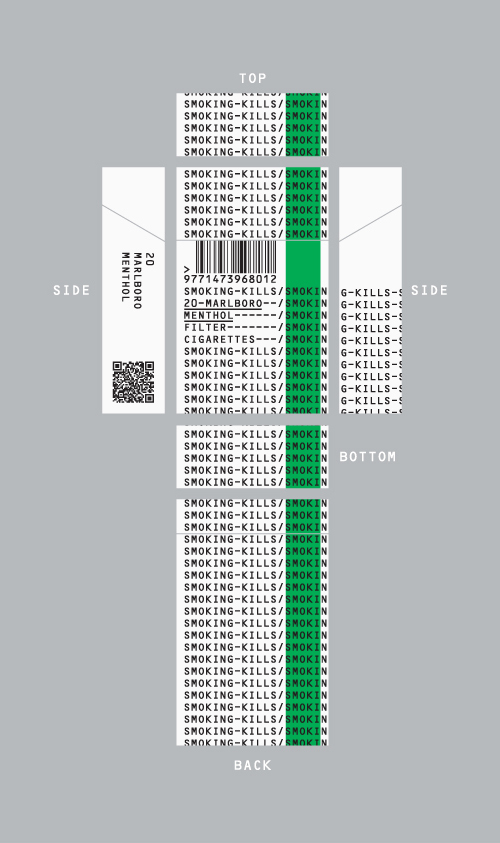 How the article appeared in the magazine: 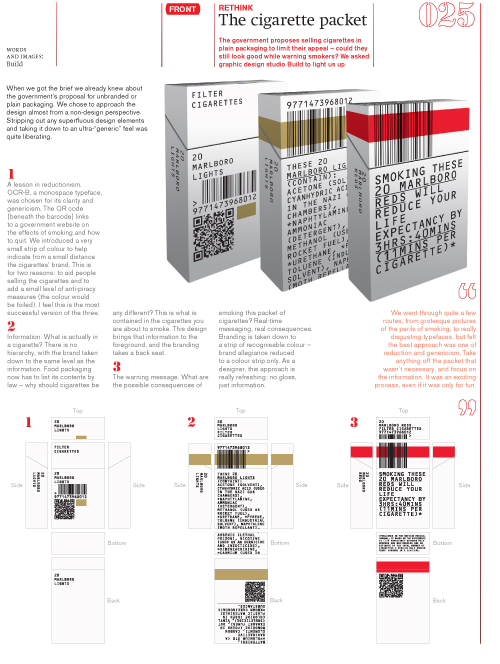 Everyone wants to stand out and be noticed. The problem is, when everyone yells at the same time, all anyone can hear is noise. Loud, annoying noise.

Walk down a retail aisle and you’ll see products screaming at you from nearly every direction. It’s incredibly hard to focus on one thing in particular and all of those deliberately busy packages seem to blend together. It’s branded wallpaper.

That’s why people take notice when brands forgo the temptation to extol their product’s “21 top-selling points” on their packaging, and instead focus on generating an emotional connection. If you’ve ever purchased an iPod or walked into an Apple Retail store, you’ll know what I’m talking about. Inspired by the minimalist approach that has become increasingly popular in architecture, product design and visual art, Apple has been able to stand out for all the right reasons.

This “less is more” philosophy has not only influenced Apple’s in-store experience and product designs, but also has influenced their logo’s evolution — from the original Isaac Newton logo, to the rainbow apple to the more simplified monochromatic outline and the current glass-themed version. Apple has used reductionism to make a revered brand even stronger.

Given the popularity of a modern, minimalist look, many leading brands are moving towards a cleaner design aesthetic. Starbucks just unveiled a new logo to commemorate its 40th anniversary and, judging by the look of things, it seems to have nailed it. The image of the siren is so iconic that the text itself had become redundant. Simplifying the image and distancing the brand from the word “coffee” enables the company to expand its portfolio into new arenas such as ice cream and bottled beverages without cannibalizing the brand’s cache.

What we can learn from the success of emotionally engaging brands like Apple and Starbucks (and also VW, Nike, Coca-Cola, etc.) is that keeping your brand simple is a formula for success. This is an approach that agencies and clients alike can benefit from.

Written by Thomas Stringham and originally featured on Advertising Age.